Back in 1879, trudging his thirty two-kilometre round, Monsieur Ferdinand Cheval, local postman at Hauterives near Lyon, stubbed his toe on an oddly-shaped rock. It was a momentous event for a man haunted by strange visions, and he welcomed it as positive encouragement to pursue a dream. He added a few kilometres to his round, and started to accrue a small pile of interesting stones in his back garden.

At first, the local townsfolk supposed he was collecting the stones to sell, but this was far too plebeian for Facteur Cheval. This Postman was building a palace.

Cheval had no experience, no training and no noticeable skills, but enough imagination to keep him working as architect, stone-mason and sculptor on his solitary project for the next thirty-three years.

Unable to decide which architectural style to use, he devised his own, an exotic blend of classical, modern and fantasy. Today we might call it outsider art – created for its own sake without reference to received establishment opinions.

Often working throughout the night by the dull glow of a paraffin lamp, Cheval was regarded as a complete lunatic by the local populace.

It’s even said the only reason they didn’t get rid of him was they couldn’t find anyone else to do his lengthy post round.

Curious, then, that today in Hauterives,  Facteur Cheval, like so many artists after their deaths, enjoys the status of superstar. The village entertains several thousand visitors each year who have come to view the bizarre but magical monument he built to his own life, and even holds a festival in his honour. The local baker has created a confection in the shape of one of the best stones. Pilgrims reverently trudge his post-route in an attempt to get a little closer to one of life’s true eccentrics.

Each summer, visitors can experience the fantasy world of The Postman’s Palace by night, eerily illuminated each evening from dusk.  M. Cheval would have approved. He alone never doubted the value of his project, laughing in the faces of his more worldly neighbours and throwing the gauntlet to would-be imitators:

“Let those who think they can do better, try…..” 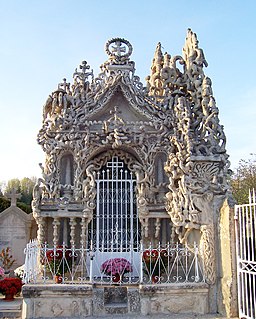 In making this post I must acknowledge the efforts of all those selfless souls who contribute to Wikimedia Commons, as, for reasons too dreary to go into, I have no images of the Palais Ideal of my own …