Sixty percent of Neapolitans live above a secret underground cavern of some kind – either man-made or natural. Volcanic eruptions, earthquakes and other ruptures have taken their toll under the streets of Naples, but far more interesting are the remains of previous inhabitants of the ancient city. 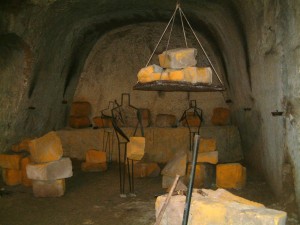 Roman engineers, early persecuted Christians, medieval plague patients jostle with more modern refugees seeking a hiding place from the Nazis, all have left their mark in often now-sealed sinister caverns right underneath the houses themselves.

While this would freak most of us, the pragmatic Neapolitans take it all in their stride. After all, land is hard to come by in this densely populated part of the world and a people who see a Roman pillar more as a handy support for their new apartment block than a piece of archaeological value or an ancient amphitheatre less a historical document than a good place to park their scooters are hardly going to bother about a creepy world 40 metres below their feet. 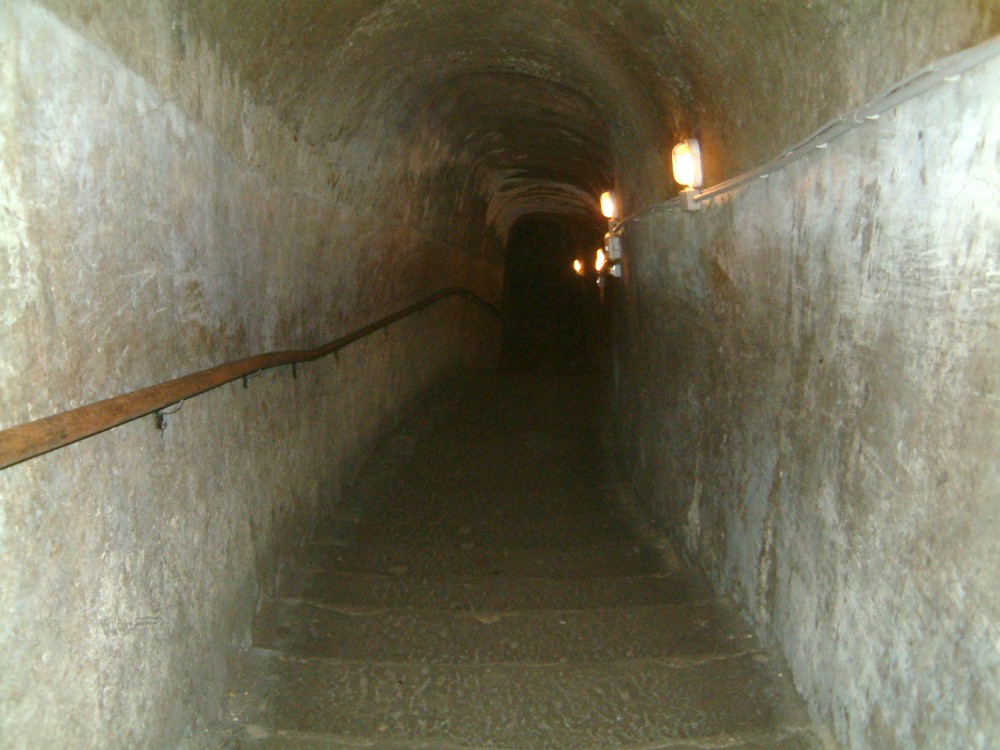 Archaeologists have always known that modern Naples lies directly over its ancient counterpart, but until recently have been unable to dig – few Neapolitans are happy to have their daily life interrupted in the name of History. But as apartments have become vacant, some sites have been taken over, painstakingly excavated, and are gradually being opened to a gaping public. 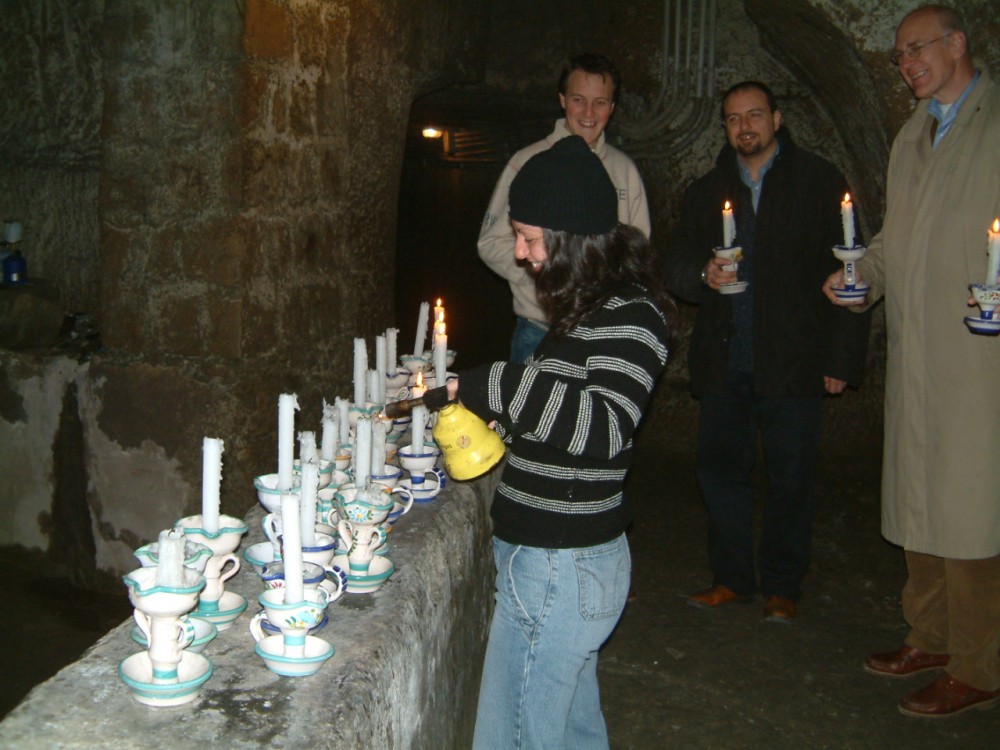 These remains are not world-shatteringly grandiose like the ruins most visitors come to this part of the world for, Pompeii or Herculaneum. But they have a dangerous, edgy, visceral feel that makes their more famous neighbours feel somehow ‘safe’. 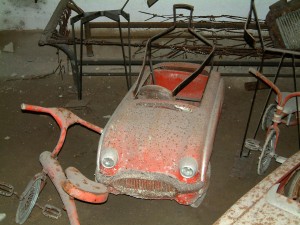 A tourist can spend an afternoon trotting around Pompeii, dodging the visitors and being generally awed. At the end of the trip they’ll sip Limoncello at a street café and smile benevolently at Vesuvius. A two-hour tour of Napoli Sotterranea leaves the visitor exhausted, disoriented and freezing cold – but truly stunned.

Naples is just starting its season at the beginning of April. We join our Napoli Sottorranea guide, Margueritta at the Piazza San Gaetano. The early-Spring sunshine is high, yet walking into the gloom of the foyer behind its decaying wrought iron gates still brings a faint feeling of foreboding.  We are warned this tour is not for the unfit, the claustrophobic or the fat. I don’t really believe it; these warnings are always exaggerated.

We are frogmarched back out into the sunshine up one of Naples’ hundreds of tiny cobbled streets, carefully avoiding the omnipresent scooters, into an unremarkable apartment block. 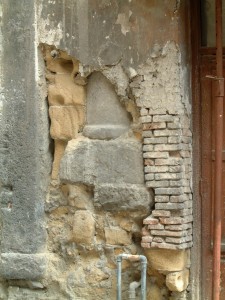 The block, still as sparsely furnished as it was vacated it five years ago, gives one clue to its secret – a single Roman brick wall. This, and what lies beneath it, is just a tiny part of the backstage area of Naples’ Roman Amphitheatre, in its day second only to the Coliseum at Rome. Margueritta, pushes back the heavy iron bed with a theatrical flourish then pulls the very floor away from us in the form of a giant trapdoor.

Treading carefully down the packed-mud steps we marvel at the Roman brickwork – built in a diamond crosshatch formation to withstand earthquakes.

This is part of the old backstage area and I imagine the Emperor Nero pacing nervously somewhere nearby, waiting to give one of his performances to his adoring crowd.  Suetonious gleefully points out, of course, that Nero was one of the world’s worst actors and that the Neapolitan audience, notoriously difficult to please even today, was paid handsomely for its applause. 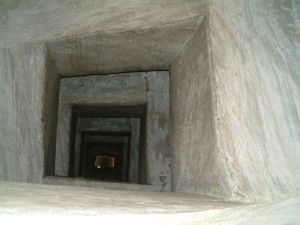 Back out in the sunshine, Margueritta points out a Roman pillar sticking out of the next door apartment. “I couldn’t show you earlier,” she confides. “The woman who lives there gets really angry…”

The main tour of the Sotterranea is cold, eerie and exhausting. Just one of its 400-odd kilometres has been properly excavated and it is not hard to understand why. It started life as the underground aqueduct that brought fresh water to the Graeco-Roman Naples from the hills of Vesuvius.

An engineering miracle, it was carved into the soft tufa by thousands of slaves, and had spurs leading to the resort towns of Herculaneum and Pompeii (its well-head can still be seen at the Vesuvius gate at Pompeii.) Hundreds of kilometres of caverns, alternating thickness, depth and angle to regulate pressure, each with a little walkway either side for a cleaner provided the Roman port with drinking water.

During the 17thC the aqueduct was enlarged to supply a city which had burst its surrounding walls. Wells from each house were sunk and it remained the main water provision until 1884, when a cholera outbreak was linked to the waters and the caves were closed indefinitely.

But it is a much later reincarnation we are first confronted with. After descending 35 metres down a steep tunnel we come to a cavern much younger in provenance. In 1943, the government reopened part of the aqueduct, now empty of water, as a refuge for those escaping the Nazis.

Much like the London Underground during the Blitz, hundreds of families lived in the cold dank world for months on end whilst hand-to-hand fighting went on overhead. Little piles of rusting toys, sewing machines, gas masks and pedal cars lie forlornly; a stark reminder of desperate times.

Cheered by what daylight can come through a well 40m above us, we are told to make the most of this natural light. The rest of the wells that we will see have been filled to prevent bomb damage. This, for the Neapolitans living above, is either a good or bad thing depending on their view of one of the region’s most enduring characters – Monaciello, (“Little Monk”) who originally derives from the roman well-cleaners.

These nocturnal creatures, skinny and scary, inhabiting the caves like 1st Century cross between Dobby and Gollum had developed, by the 17th Century into shady characters who could hop from house to house via the underground networks, demanding protection money for not poisoning the water, stealing things and seducing lonely housewives, eventually passing into legend as a kind of Commedia del’Arte spirit, who could either be benign or malevolent. To this day, if an item goes missing in a Neapolitan house it is said that Moniciello has had it away.

From here on in, the way gets darker, narrower and colder. Passing a demonstration model of how the caves were dug, we are brought to a small, claustrophobic room where, Margueritta proceeds to light a number of wax candles in pottery holders.

In the great Italian spirit of personal responsibility, we are each entrusted with one, and told that if we choose, we need not go any further.

Margueritta is not exaggerating when she warns us that the way will become difficult. Within a few metres the tunnel gets down to 50cm wide and not much taller than our heads.

For 90metres we stumble on in the blackness, our candles held like talismans before us. Finding it hard to go straight, I try walking sideways like a crab. My little rucksack-style handbag scrapes along the back, and I slip it to the front, papoose-like, thanking my stars I didn’t stop earlier for souvenirs. Our breath escapes in little puffs of steam.

After what is very nearly as much as I could stand of this all-enclosing world, we spill out into a cavern where the archaeological society have reconstructed a small part of the original roman aqueduct.

From high above, a little amphora slides into the crystal-clear waters (albeit a little speckled by candlewax) and goes to join a pile of pots on some steps round the side. It is, in its own way, as spectacular as anything to be seen at the flashier Pompeii. The only thing that dampens the spirits is the thought of the return journey.

Just as Margueritta is showing us yet another cavern – a cunningly constructed storeroom created by nuns in the 19th century where the steps are carved out of the old well, an elderly lady startles us from behind. Disconcerting for us, it is nothing to her response – one of intense relief.

An American from another tour, she turned back from the 90metre nightmare cave and found herself wandering alone. Although it is impossible to become truly lost in these caves (they are sealed off by years and years of illegally dumped rubbish from the city above) my heart goes out to her. It is a creepy enough experience with people. I am glad to see the warm spring sunshine again. Our American lady, however, seems to have survived remarkably unscathed. Perhaps Moniciello is feeling benevolent today…

Visits are by guided tour only and last around two hours.

If you would like to syndicate this story or commission Sandra to write something similar please contact her at the following address, missing out the obvious gap…